For everything there is a season, and a time for every matter under heaven.  – Ecclesiastes 3:1

Spring is officially upon us, and recently, the beloved sweet gum in front of our house seems, well… a little stuck.  As I look at it each day, it reminds me a little about how God calls us to embrace the changing seasons in our lives, with His help. 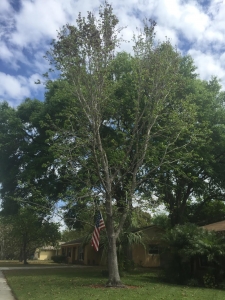 This past fall, the usually beautiful green leaves adorning the branches of the tree that anchors our yard began to display little brown spots all over them.  As the season drew on, the brown spots began to grow, and the leaf tips began to curl and brown, signaling that it was time to begin the process of shedding the old, dying, lackluster leaves for the winter.  As expected, the leaves began to fall. And fall they did, throughout December, January, February, and March, starting from the lowest branches. All those falling leaves created some mess than needed to be cleaned up.. but I could see that the tree was readying itself for the new creation it would become in the spring.

Then, suddenly, the falling seemed to stop.  The tree seemed to cling relentlessly to the last clusters of leaves at the very top.. utterly unwilling to let go of them for some reason.  Buds, promising newness and beauty, formed on every branch and stem. Yet even now, as new vibrant green leaves emerge daily, that sweet gum still refuses to let go of the last of the dead dry ugly leaves adorning its crown — And the new bright green flourish is somewhat tarnished by the lingering sadness of the old.

I wonder if that sweet gum in front of my house isn’t a perfect metaphor for how we, as Christians, sometimes behave during certain changing seasons of our lives.  We cling to remnants of a season God is calling us out of, and refuse to fully embrace the season we’re being called into, thereby missing an opportunity to be washed clean — to shine boldy in our newness — and to face the new season we’re thrust into with confidence.

When that tree finally decides to let go of its last lingering blemished, dead, leaves it will stand with striking beauty in the lush newness of this new season.   We, too, have the opportunity to let go of the tarnished, old, and dying things we cling to and allow God to work in the changing seasons of our lives.